Vidau On Top In Captivating Second Formula Ford Round

Vidau On Top In Captivating Second Formula Ford Round

Max Vidau has taken his second-consecutive Australian Formula Ford round win, coming out on top in a captivating contest in the second round of the 2017 series at Wakefield Park on the weekend.

“It was close racing all weekend, but the Sonic guys gave me an awesome car and it’s great to be leading the points heading to the next round at Winton,” Vidau said.

After starting ninth in Race 1, McLellan charged his way to fourth, before finishing second in Races 2 and 3 to clinch the overall runner-up spot.

“It was my first time racing at Wakefield Park but I loved it,” McLellan said.

“The Borland team gave me a lot of support which enabled me to learn the track quickly and it ended up being a very good result with a lot of fun battles.”

Murray finished fifth in the first two races, and third in the final was enough for him to secure a podium result for the weekend.

“Our consistency was good this weekend – we were there or thereabouts in each race,” Murray said.

“It was good close racing between all the competitors and I really enjoyed it.” 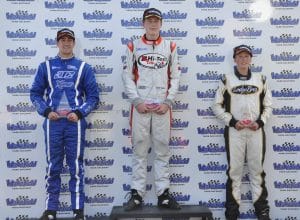 The unofficial winner of the “what might have been” honours for the round was Hunter McElrea. The son of Carrera Cup team owner Andy qualified fastest, winning the Shell Helix pole award and becoming the first New Zealand driver to take an Australian Formula Ford pole since Mitch Evans in 2009.

An error in Race 1 saw McElrea falling to 18th. In Race 2, he produced a storming drive to first place at the chequered flag, only to receive a post-race penalty for contact with another competitor which dropped him to 10th.

Not to be discouraged, McElrea again worked his way to the front in Race 3 and claimed the final race victory of the weekend, finishing sixth overall.

“We showed good pace this weekend and while we made hard work of the races, our speed gives us a lot of confidence for the rest of the season,” McElrea said.

The Formula Ford meeting also included the opening round of the NSW State Championship, with Jackson Burton winning the Duratec Class, and Mitchell Maddren taking out the Kent Class.

Round 3 of the 2017 Australian Formula Ford Series will be held as a support category to the Virgin Australia Supercars Championship at Winton Raceway on 19-21 May.