A couple of well-judged overtaking moves on the Surfers Paradise street circuit have enabled Dean Cook to add another Porsche PAYCE Carrera Cup Australia Pro-Am Class podium to Ashley Seward Motorsport’s tally, in the final round of the series this weekend.

After finishing fourth in Race 1, Cook slipped past rivals Tim Miles and Liam Talbot with moves at Turn 11, and was able to claim second position in Race 2.

Cook secured the overall podium result with third place in Race 3, despite a time penalty for short-cutting the first chicane on the opening lap.

“That was a really good weekend – we started out with some good pace in practice and qualifying, where I was doing my best-ever lap times around the track, and it got better from there,” Cook said.

“In the first race, I was losing some time out of the last corner, so I worked on my technique and in the Sunday races, it was a lot better.

“There’s always drama and damage here at the Gold Coast, so I knew a good result was on the cards if I stayed out of trouble. I’m stoked to finish the season with a trophy.”

Scott Taylor also recorded his best lap-times at the venue, and paid credit to the Ash Seward Motorsport team for repairing his car after an incident in Race 2. 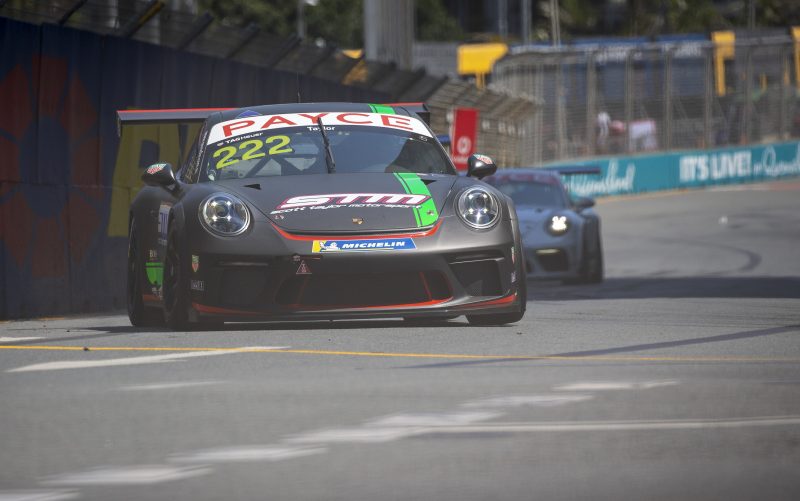 “I’m still getting used to driving these Carrera Cup cars; with the engine in the back, it becomes like a pendulum that swings you around if you lose control,” Taylor said.

“I had a moment in Race 2 that would have been a harmless spin at any other track, but here it meant I was in the wall.

“Fortunately, there wasn’t too much damage and the crew did a fantastic job of fixing the car – it looked brand-new by the time I went out for Race 3.

“At the start of Race 3, I lost some time with an incident in the first corner, but I got going again and was able to do my fastest lap of the whole weekend, so I was very happy with how it finished.”

Team owner Ash Seward was proud of the efforts from drivers and crew members throughout the event.

“Everyone did their job very well this weekend – drivers, engineers and mechanics,” he said.

“The performances of both drivers kept improving, and even when we had a bit of a setback with Scott’s car in Race 2, everyone did an efficient job to get it back on track, and Scott was confident enough to do his best time of the weekend.

“Dean finished the year with another podium, and overall it’s been a very successful season in terms of driver enjoyment.”’

The 2019 Carrera Cup season may be complete, but Ashley Seward Motorsport will be back in action for the final rounds of Porsche GT3 Cup Challenge and TCR Australia on 15-17 November.