One-make racing series for relatively affordable cars have come and gone from the Australian motor racing scene over the last few decades, with varying levels of success.

In the 1980s, the Ford Laser Series had a widespread presence, and was contested by the likes of Mark Skaife and David Brabham, among others.

Fast-forward to the 1990s and Warren Luff was using the Suzuki Swift Series as a launching pad for his career, while the early 2000s saw the rise of Paul Pickett’s MoPro Australia operation, which managed the Daewoo, MGF and Lotus Elise/Exige categories before it collapsed in 2006.

Two years later, the Mini Challenge Series was born, running for three seasons before it folded at the end of 2010. It was moderately successful at best, with average grid sizes in the low to mid-teens.

But in 2016, the Toyota 86 Series exploded onto the scene with a massive 38-car grid, and has since gone from strength to strength. The category’s unstoppable momentum doesn’t look like faltering anytime soon either; the opening round of the 2018 series attracted a whopping 39 entries, and Toyota extended their backing of the category to the end of 2020 (at the earliest).

So, why is the Toyota 86 Series so successful?

Quite simply, the exposure-for-money ratio in the 86 Series is better than any other category in the country. Entry fees are capped at $1,500 per round, and all six rounds of the series are on the support program for the Virgin Australia Supercars Championship. Not only is this an attractive proposition for drivers and teams, the profile of competing at some of the country’s largest motorsport events and TV coverage package is very enticing for sponsors. 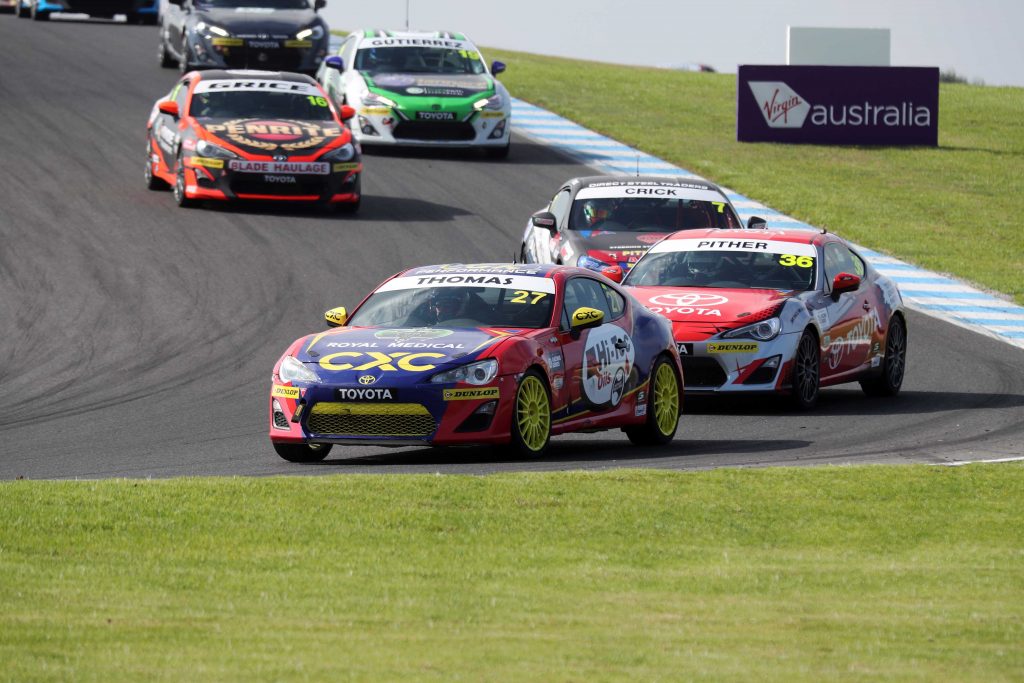 When Toyota announced the creation of the 86 Series, Neil Crompton’s Airtime Autosport operation was engaged to handle series management and operations. With his vast network of motorsport connections and personal experience in the sport, there’s no question Neil knew exactly what was required to properly and professionally manage a motorsport category, and he recruited a category management team with some highly dedicated and talented operators perfectly suited to their specific roles.

Names like Phil Harrison and Craig Nayda have been around the sport for decades and have no shortage of knowledge and expertise when it comes to handling the demands of running a motorsport category. These demands include competitor administration, liaison with event promoters and sanctioning bodies, authoring sporting and technical regulations, co-ordinating personnel at events and the list goes on. In the fast-paced environment of a race weekend, it only takes a small hiccup in one of these operational areas to create dramas, but the 86 Series runs like a well-oiled machine.

With such a large field of drivers with varying abilities, management of driving standards in the Toyota 86 Series is critical, and Greg Crick is the ideal person for this position due to his wealth of experience and no-nonsense methods of communication.

On the technical front, anything Neal Bates Motorsport doesn’t know about Toyotas is not worth knowing, and an addition to the category for 2018 is Jason Bargwanna, whose friendly and approachable persona combined with his racing achievements make him an ideal driver mentor.

This final point, in particular, is one a lot of other motorsport categories would do well to observe.

Many national categories are targeted at very specific audiences. Formula Ford and F4, for example, are targeted at young guns aiming to make a professional motorsport career. The Australian GT Championship’s target market is successful business owners who enjoy spending their weekends racing exotic machinery, while other categories like the Australian Production Car Championship appeal to those who like endurance racing, and don’t mind competing against others in different machinery.

The 86 Series caters for a combination of aspiring professional racers and weekend warriors who want a more professional environment with a higher level of exposure than state or club-level racing, but don’t have the budget to compete in Carrera Cup or the GT Championship.

The fact that all the cars are identical is also a big selling point for competitors who want to see exactly how they stack up against others with the same equipment.

The exposure opportunities offered by the Toyota 86 Series make it a genuine option for up-and-coming racers aiming to make it to the top echelons of the sport.

In terms of pure driver development, a Toyota 86 race car is not as educational as a Formula Ford – drivers who have raced in both categories are quick to point this out.

However, this drawback is more than counterbalanced by the commercial and exposure benefits of the 86 Series compared to national Formula Ford, and that’s why drivers like Broc Feeney, Jay Robotham and John Iafolla have bypassed Formula Ford altogether. It’s also why Cameron Hill – who won the national Formula Ford title in 2015 – raced a couple of seasons in 86 Series before progressing to Carrera Cup.

And the closeness of the Toyota 86 Series still teaches drivers about race-craft and maximising the performance of their vehicles while minimising mistakes. The series also provides resources to enable drivers to learn and improve, such as running cars for a couple of experienced guest drivers at each event, and making their data and in-car footage available to the rest of the field.

With other sweeteners such as a dedicated launch day (with exclusive use of the track, an open pit-lane and a workshop session with guest speakers), a pool of prize money and a formal awards night, there’s no doubt that the Toyota 86 Series is run like a proper business, that treats the competitors as the customers. It’s a fundamental principle that some other motorsport categories fail to recognise, and it’s also the main reason why the Toyota 86 Series is the most successful affordable one-make series we’ve seen in the country for some time.